The Irish Rugby Football Union (IRFU) were the owners of the Lansdowne Road Stadium. The stadium which was a sporting venue for 134 years was demolished in 2007. The demolition made way for the building of the Aviva Stadium which opened in 2010.

An athlete called Henry Dunlop was the founder of the Irish Champion Athletic club in 1871. Dunlop who was also an engineer took a 69 year lease on grounds adjacent to Lansdowne Road for his club. Using his skills as an engineer he laid down a cinder track and tennis court. He also laid out a rugby pitch for Lansdowne Rugby Football Club which he founded in 1872. Wanderers Football Club became a tenant later. The two clubs continue to use the new Aviva stadium.

The first ‘colours’ match, an annual rugby union fixture between Trinity College Dublin and University College Dublin, was played at Lansdowne Road in 1952. International rugby games were held alternatively in Dublin and at Ravenhill in Belfast but, in 1954 Lansdowne Road became the venue for all of Ireland’s International rugby games. In August 2010 a new rugby and soccer 50,000 all-seater stadium was opened.

Lansdowne Road Stadium hosted its first international rugby game when Ireland played England in the year 1878 On This Day. 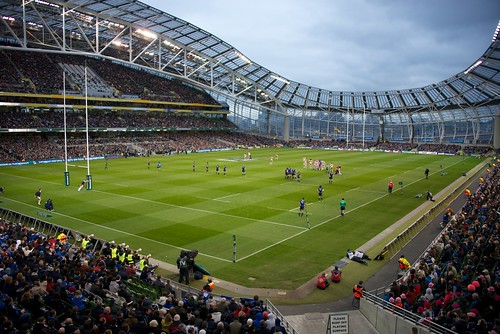