Edward VII, King of the United Kingdom, and his wife Queen Alexandra visited Kilkenny City, Ireland in 1904. The royal couple and their daughter Princess Victoria had arrived at Dún Laoghaire (then Kingstown) on April 26th 1904. They travelled by rail to Naas and attended the Punchestown Races for the day. As Prince of Wales Edward VII had previously attended the Punchestown Races in 1868. The Royal party later continued their journey, again by rail, through Carlow to Kilkenny City.

King Edward VII was no stranger to Ireland. As Prince of Wales he was stationed at the Curragh in Kildare when his mother Queen Victoria, her husband prince Albert and three of their nine children came to visit Ireland in 1861. At the time he was undergoing military training with the Grenadier Guards. Queen Victoria and her family spent eight days visiting several part of Ireland including Killarney and the Curragh Camp where she watched he son marching on parade.

Whilst stationed at the Curragh the future Edward VII began a relationship with Nellie Clifton who was described as an actress. His parents were horrified when they heard of the relationship. Queen Victoria blamed the relationship for the early death of her husband. When he became king following the death of Queen Victoria, Edward VII visited Ireland in 1903. However he curtailed his visit due to the death of Pope Leo XIII who died on the day of the king’s arrival in Ireland.

In 1904 The Royal party arrived by train to a bright, colourful Kilkenny city which was festooned with flags and bunting. The route from the railway station to Kilkenny Castle was decorated with tiny fairy lights of every colour together with bunting and streamers. Among all the colour and excitement at the visit however, flags protesting at the visit were hung from some windows along the route. The Royal party was welcomed at the railway station by Kilkenny city authorities and the Marquis of Ormonde.

As the King and his family made their way through the thronged city streets there was chanting and cheering from the crowds. On the first night of the visit a fireworks display was held that lit up the night sky of the entire city. During their two day stay in Kilkenny the Royal family visited the Kilkenny Agricultural Show. The show was being held in St James Park on Saturday, the first day of their visit. On Sunday the family attended service in St Canices Cathedral and attended other events. Princess Victoria planted three trees in the grounds of Kilkenny Castle. Having spent two nights and three days in Kilkenny the Royal family left by train for Waterford. They sailed form Waterford on May 4th. The King and his wife visited Ireland again in 1907.

King Edward VII began his visit Kilkenny city in the year 1904 On This Day. 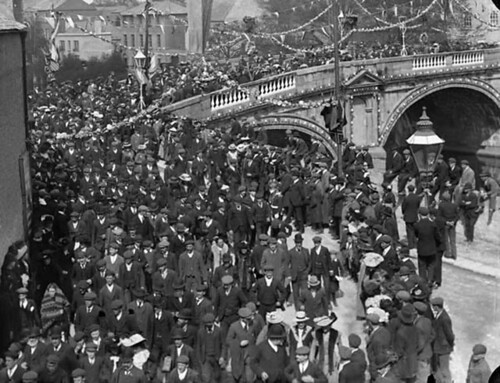 Photo by National Library of Ireland on The Commons Royal Group, crowds 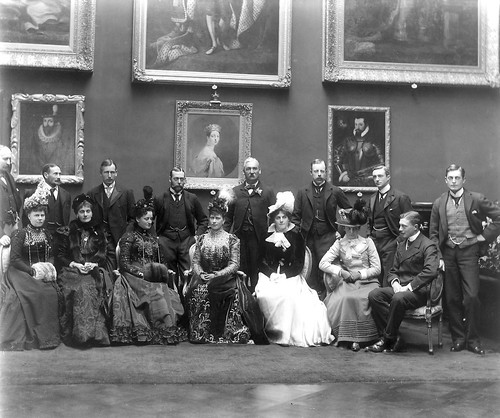