Thompson of Carlow, Ireland manufactured and installed the Millennium Bridge which spans the river Liffey near Dublin City centre. It is a pedestrian bridge located just over 100m upriver from the Ha’penny Bridge. The Ha’penny Bridge, also a pedestrian bridge, was 200 years old in 2016. Thompson, an Original Equipment Manufacturer, is one of the longest established steel fabricators in Ireland.

A pedestrian bridge linking Temple Bar with the north quays was first proposed in the 1980’s. With the year 2000 approaching the bridge, like many others around the world, became a millennium project. It is one of at least fourteen bridges which were built to mark the new millennium in countries such as the United Kingdom, Montenegro, Poland, the United States and Russia. The Millennium Bridge links Temple Bar on the south side of the Liffey with the north quays.

Dublin Corporation held an international competition in 1998 to design the new bridge. The competition attracted 157 entries and the chosen design was for a lightweight steel span projecting from concrete supports on the quay walls. The steel span is 41m long and 4m wide. While the central span was being manufactured at Thompson’s engineering works in Carlow the platforms on either side of the river were being built another Carlow based firm Formwork 2000+.

When the 60 tonne steel span was completed in Carlow it was transported 80km by road to Dublin. On arrival on the quays in Dublin it was lifted onto the prepared concrete supports by crane. The bridge was opened to the public on December 20th 1999.

The central span of Dublin’s Millennium Bridge took just half an hour to be lifted and fixed into position across the Liffey in the year 1999 On This Day. 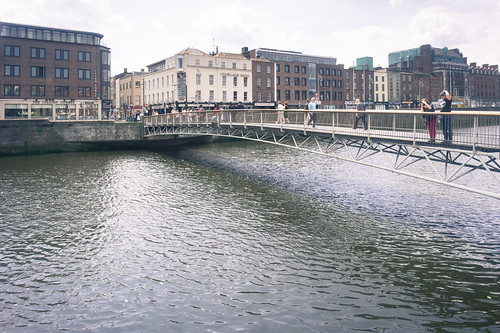 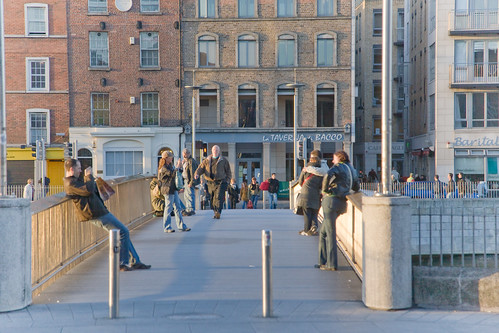 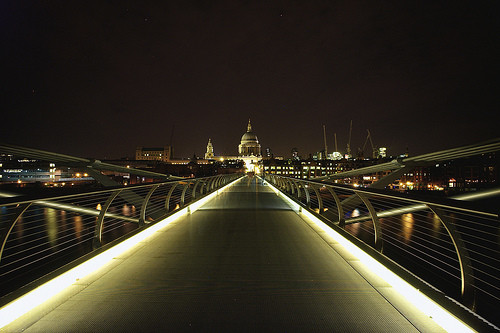 Jack Lynch was a sportsman and politician who served two terms as Taoiseach of Ireland from 1966 to 1973 and 1977 to 1979. Prior to entering politics Lynch had a successful sporting career in Gaelic Games. He won All-Ireland medals in both Hurling and football.

Jack Lynch was born John Mary Lynch in Cork City Ireland on August 15th 1917. He was educated locally and having studied law was called to the bar in 1945. On the sports field Lynch won five All-Ireland hurling medals with Cork (1941-4 and 1946). He won an All-Ireland football medal with cork in 1945.

The Fianna Fáil political party asked Jack Lynch to stand as a candidate in the General Election of 1948. He was elected as TD for the Cork Borough constituency. He was returned to Dáil Éireann for the constituency at each subsequent election until his retirement in 1981.

Jack Lynch served in several ministries before being elected Taoiseach in 1966. As Taoiseach he had to deal with the outbreak of civil unrest and the collapse of the Government of Northern Ireland. In 1970 he dismissed two cabinet members during the Arms Crisis. Lynch developed the idea of a power sharing administration between Unionists and Nationalists as a solution to the Northern Ireland problem.

Stanley Kubrick chose the 15th century Huntington Castle in Clonegal, County Carlow, Ireland as the setting for some of the scenes in film ‘Barry Lyndon’. The film which tells the story of an 18th century Irish adventurer. It was the winner of four Oscars at the Academy Awards in 1975.

Stanley Kubrick was born in New York City on July 26th 1928. Though interested in literature he did not do well at school. He was later reported to have said that nothing about school interested him. Kubrick was taught to play chess by his father. He became a skilled player and chess played an important part in the making of his films.

In 1962 Kubrick moved to England to make the film Lolita. He began to live permanently there after 1964. He died at his home in England shortly after a private screening of his final film, ‘Eyes Wide Shut’.

Stanley Kubrick died at the age of seventy at his home in Hertfordshire, England in the year 1999 On This Day. 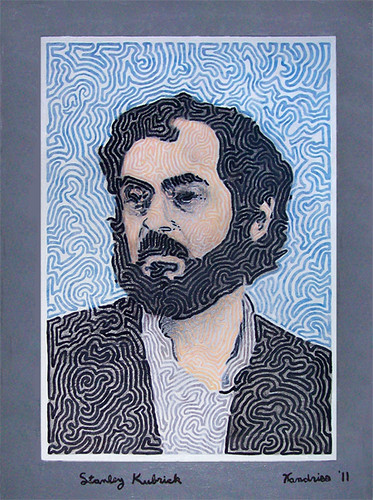 Cainneach is a sculpture located on Parliament Street in Kilkenny City, Ireland. Made of bronze and Kilkenny limestone the sculpture is by the Spanish born artist Saturio Alonso. Kilkenny City is named after Saint Canice (Cainneach), the patron saint of Kilkenny, who was born in 514 AD.

Though dating back to the 6th century Kilkenny (Cill Chainnigh) is first mentioned in The Annals of the Four Masters in 1085. The city, which is located in the Southeast of Ireland on the banks of the river Nore, has a population of almost 25,000. Including Lisburn (71,465), Newry (27,433) and Armagh (14,749), Kilkenny is one of just four inland cities on the island Ireland.

Settlement in Kilkenny can be traced back to early medieval times. Following the Norman invasion the Anglo-Norman Lord of Leinster William Marshall gave Kilkenny its first charter and the first Council was elected in 1231. The chief magistrate was called the Sovereign and the Kilkenny became the seat of the lordship of Leinster. Since 1231 Kilkenny has continued to have a municipal government.

Almost 400 years after the granting of its first charter Kilkenny sought to be elevated to the status of a ‘city’. Thomas Butler of Kilkenny Castle, a cousin of Queen Elizabeth I through Anne Boleyn, was at the time the 10th Earl of Ormonde. It was during his time that city status was obtained for Kilkenny. In 1609, six years after James I became King of England, Nicholas Langton was sent to London by Kilkenny Corporation to receive a Royal Charter creating Kilkenny a city.

Today Kilkenny is a thriving tourist and commercial centre. Together with Kilkenny Castle the city retains many of its historical buildings including the Round Tower at St Canice’s Cathedral, Rothe House and the Tholsel.

Cainneach (St Canice), a sculpture by Saturio Alonso, was unveiled by its sculptor on Parliament Street in Kilkenny City in the year 1999 On This Day. 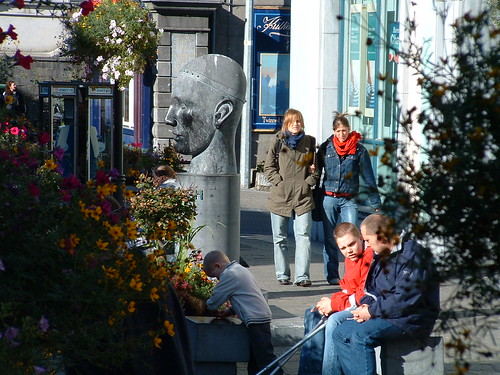 Altamont House and Gardens are located just over 20km south of Carlow town, Ireland close to the village of Ballon. The Gardens, which are a major tourist attraction cover about 16 hectares. They have both formal and informal parts and have lake and riverside walks.

In the mid 1700’s, when the Altamont House and Gardens was known as Rose Hill, the St George family built the central portion of the house incorporating an earlier building. Lines of beech trees, which are still feature of Altamont, were planted. In a map dated 1770 the property is referred to as Soho but later changed to Altamont through a connection to Earl of Altamont in Westport County Mayo.

The Dawson-Borrer family later acquired the property, extended the house, terraced the gardens and created a central broad walk extending down to an artificial lake. The lake was dug during the 1840’s as a famine relief project. It was dug out by hand by over 100 men and took over two years to complete. Below the lake, a walk through ancient oak woods leading down to the river Slaney was installed. Leading back from the river to help negotiate the steep gradient, a hundred hand-cut granite steps were installed. The path across a field leading back to the house passes a Wellingtonia. It was planted to commemorate Wellington’s victory at Waterloo.

The Lecky Watson family from Fenagh acquired the property in the early 1920’s. Mr Lecky Watson is reported to have killed the last Irish wolf about 14km from Altamont. He had a special interest in rhododendrons and continuously extended the garden. Following his death in 1943 the gardens became gradually overgrown. His daughter Corona North instituted a programme of restoration which began in the 1970’s. The lake was dredged, weeds cleared, walks restored, new areas created and the Gardens were opened to the public. They became a major tourist attraction, attracting thousands of visitors annually.

Corona North devoted many years of her life to Altamont Gardens. When she died Altamont House and Gardens were handed over to the Irish State at her request. The formal handing over ceremony took place on January 17th 2014. Today the Gardens are administered by the Office of Public Works. They attract over 50,000 visitors annually and are often referred to as the jewel in the crown of Carlow tourism.

Altamont House and Gardens were bequeathed to the Irish State by Corona North, who died in the year 1999 On This Day. 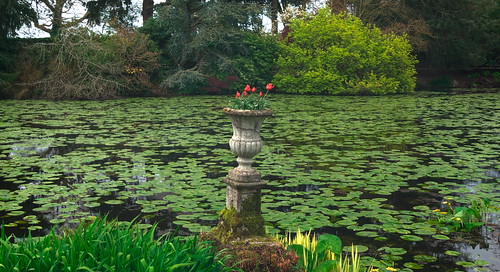 A view of part of the lake at Altamont Gardens