The Battle of Waterloo marked the final defeat of Napoleon Bonaparte Emperor of the French. In June 1815 the Seventh Coalition of nations intended to invade France and remove Napoleon as Emperor. Two of the armies of the Seventh Coalition, the British and Prussian defeated the French Army at waterloo. It is estimated that over 8,000 Irish soldiers, some of them in Napoleon’s army, fought at Waterloo.

During the early part of the 19th century Napoleon Bonaparte conquered much of Europe through a series of wars. In 1812 he invaded Russia. The invasion resulted in a disastrous defeat. This together with other defeats led to the abdication of Napoleon in 1814. He was exiled to the island of Elba.

Napoleon escaped from Elba in February 1815. He was declared an outlaw at the Congress of Vienna on March 13th 1815. He returned to Paris and, on March 20th, embarked on what has come to be known as the Hundred Days Campaign.

Napoleon was regarded as an enemy by the Austrians, the Prussians, the British and the Russians. They raised an army to invade France and defeat him. Napoleon marched into Belgium on June 15th with the intention of defeating the allied forces one by one. He forced the Prussians to retreat but failed to destroy their army. He then moved against the British who had retreated to a defensive position near the village of Waterloo about 15km south of Brussels.

The British Army was under the command of the Duke of Wellington. It was made of British, Irish, Belgian, Dutch and German troops. Napoleon’s army mounted a strong attack against the British. However the tide was turned against the French by the arrival of the Prussians. Napoleon’s Army retreated in chaos. There were thousands of casualties on both sides.

Napoleon abdicated on June 22nd 1815 and sought asylum from the British. Napoleon did so in order to avoid Prussian troops who had been ordered to capture him dead or alive following the battle of Waterloo. He was exiled again, this time to the island of St Helena in the south Atlantic. He died there at the age of 51 on May 5th 1821.

The Battle of Waterloo was fought in the year 1815 On This Day. 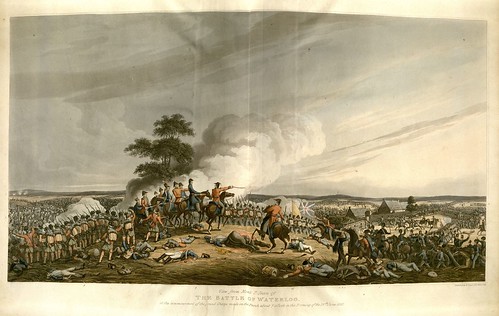