The song ‘Follow me up to Carlow’ celebrates victory by Fiach McHugh O’Byrne over an English army of 3,000 soldiers at the Battle of Glenmalure, Co Wicklow, Ireland in 1580. It was written by songwriter P J McCall over three hundred years after the battle had taken place. McCall’s father John was from Clonmore Co Carlow.

At the time of the battle, the Pale (an area around Dublin) was the only part of Ireland directly under the control of the English government of Elizabeth I. The remainder of the country was controlled by autonomous Gaelic and Norman lords most of whom paid only token recognition to the English crown. The territory in the Wicklow Mountains to the south of Dublin was under the control of the O’Byrne’s who frequently raided the Pale. Several attempts were made to deal with the raids. Sometimes these attempts involved counter attacks on O’Byrne which usually led to a settlement only for O’Byrne to carry out another raid.

In 1580 during the Desmond Rebellion, O’Byrne formed an alliance with James Eustace, Viscount Baltinglass and the Kavanagh clan. He carried out an ambush on British forces in Carlow in August. Around this time Arthur Grey, the Baron Grey de Wilton became Lord Deputy of Ireland. He arrived with an army from England to put down the rebellion. He also wanted make Ireland more secure in order prevent collaboration with Spain. There were rumours at the time that support for the Irish was being assembled in Spain and the Papal states.

Grey decided to march into the Wicklow Mountains and attack O’Byrne’s stronghold in Glenmalure. However his soldiers were inexperienced and the terrain was difficult. The army marched into the glen and was easily ambushed by O’Byrne’s army hidden in the woods above the valley. The English suffered heavy losses and retreated in disarray down the valley. Further losses were inflicted on Grey’s army by the Irish who pursued them for several miles. It is claimed that 800 English soldiers were killed in the battle. Grey eventually retreated with his army to Dublin.

Fiach MacHugh O’Byrne led his army to victory at The Battle of Glenmalure in Co Wicklow in the year 1580 On This Day. 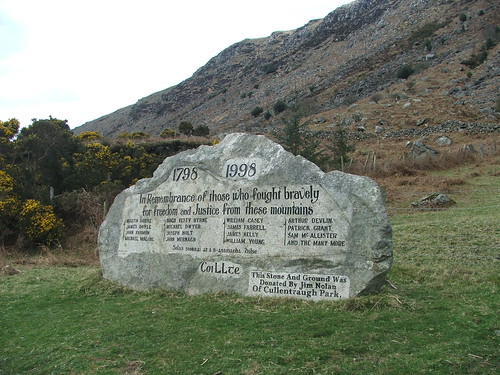