Nobel Laureate Ernest Walton was an experimental physicist who was a native of Co Waterford, Ireland. In partnership with English physicist John Cockcroft he became the first person in history to artificially split the atom. The successful experiment was carried out in 1932 when Walton was 29 years old. Walton and Cockcroft were jointly awarded the Nobel Prize in Physics in 1951 for their pioneering experiment. To date Walton is the only the only Irish person who has been awarded a Nobel Prize in the field of science.

Ernest Thomas Sinton Walton was born in Abbeyside, Dungarvan, Co Waterford. His father was a minister in the Methodist Church. This meant the family had to move to a new congregation/parish every three years. As a result, Walton as a child moved with his family from Dungarvan to Rathkeale, Co Limerick and later to Co Monagahn. He attended school in Banbridge Co Down, Cookstown Co Tyrone and Wesley College in Dublin. He received his second level education at Methodist College, Belfast from where he was awarded a scholarship to Trinity College Dublin in 1922. He graduated with first class honours in Mathematics and Physics in 1926 and received a M.Sc. in 1927.

In 1934 Ernest Walton returned to Ireland to work at Trinity College Dublin. In 1946 he was appointed Erasmus Smith Professor of Natural and Experimental Philosophy at Trinity, a position he held until his retirement in 1974. He continued to be associated with the physics department at Trinity for the rest of his life and presented his Nobel Medal to the College. He died on June 25th 1995 at the age of 91 and is buried at Deansgrange Cemetery in Dublin.

Apart from his academic activities Ernest Walton was involved in a range of committees involving Government Departments, the church, and institutions such as the Royal City of Dublin Hospital. He served for many years as a member of the Board of Governors of Wesley College Dublin. He regularly attended the annual Young Scientist Exhibition in the RDS. In 2015 a commemorative Ernest Walton coin issued by the Central Bank of Ireland was presented to special award winners at the Young Scientist exhibition in Dublin. Each year the Department of Education and Skills awards the Ernest Walton STEM (Science, Technology, Engineering & Mathematics) Bursary to selected second level students who intend to complete a third level course in the STEM field.

Ernest Walton was born in the year 1903 On This Day. 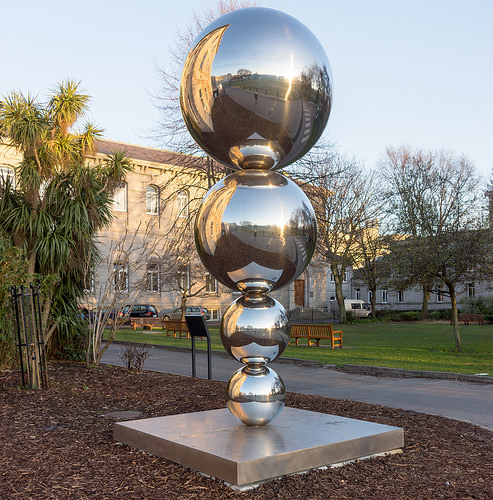