Ireland’s first railway was 10km long and ran from Westland Row station (now Dublin Pearse) in Dublin city to Kingstown (now Dún Laoghaire). It was the first suburban and commuter railway line in the world. The railway, which began operations in 1834 continues to operate to the present day.

In 1825 the Stockton and Darlington Railway in England had proved successful for the colliery owners. The success encouraged investment in the railways. In the same year an attempt to build a railway from Dublin to Kingstown failed to get approval. A year later in 1826 a railway line between Waterford and Limerick was authorised. However it was not until 1834 that the line from Dublin to Kingstown was built.

The company which would build the railway was founded in 1831. Following the passing of the necessary parliamentary act, the contract to build the railway line was awarded to William Dargan. William Dargan was born near Carlow town, Ireland on February 28th 1799. In his early career he built roads in England and Ireland most notably the road from Dublin to Howth. Following the successful completion of the first railway line in Ireland, Dargan went on to build over 1,300km of Ireland’s railways. He is often referred to as the father of the Irish rail network. He was also responsible for a host of other infrastructure projects around Ireland and he funded the Great Industrial Exhibition in Dublin in 1853.

Construction on the new railway line began on April 11th 1833. Several engineering difficulties and opposition from some landowners along the route had to be overcome. Up to 1,800 people were employed when building was at its peak. It was built within the agreed budget and on time. The first journey was made by horse drawn coach, when one of the lines was complete in July 1834. The journey was made by directors of the company and their friends. Though the new service was resented by many, over 300,000 passengers used it in the first six months when it began service in 1834. Trains ran every half hour from 6am until midnight. It was later decided to extend the railway southwards. Isambard Brunel was appointed as consulting engineer for the line to Greystones. The railway line eventually reached Wexford in 1872.

The first railway train in Ireland which consisted of eight carriages hauled by a steam locomotive (Hibernia) ‘filled with ladies and gentlemen’ travelled from Dublin to Kingstown (Dún Laoghaire) in the year 1834 On This Day. 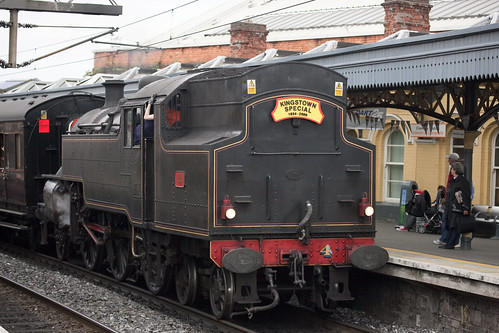