It is said that as the Titanic was sinking, the band on board played ‘Nearer my God to Thee’. 1,517 people including the band leader Wallace Hartley, and all members of the band, died when the ship went down. The violin which Hartley was playing was sold at auction for £900,000 in 2013.

The Titanic was a luxury passenger liner which was built at the Harland and Wolff shipyard in Belfast, Northern Ireland. At the time of its launch it was it was the largest ship afloat. The maiden voyage of the Titanic began at Southampton on April 10th 1912. The ship called at Cherbourg in France and at Cobh (then Queenstown) Co Cork on its voyage to New York. When it left Cobh the ship was carrying 2,224 passengers and crew. Just four days into its voyage the ship hit an iceberg on April 14th 1912. The Titanic began to sink and mayday messages were transmitted.

It quickly became clear that passengers and crew would have to be disembarked. The Titanic however, was only equipped with enough lifeboats to accommodate just over half the number of people on board. In an effort to keep passengers calm as they were being loaded onto the lifeboats Hartley and his fellow band members were asked to play music. Reports from survivors say that the band continued to play until the end. Less than three hours after hitting the iceberg the Titanic sank with over one thousand people still on board.

The body of Wallace Hartley was one of those recovered by the ship Mackay–Bennett. His body was fully clothed and his music case was strapped to his body. His violin was given to his fiancée. It was given to the Salvation Army when she died. The violin was found in the attic of a British man’s house in 2004. During the following nine years the violin went through a process of verification before being put up for auction.

The violin which band leader Wallace Hartley was playing as the Titanic was sinking was sold at auction for £900,000 in the year 2013 On This Day. 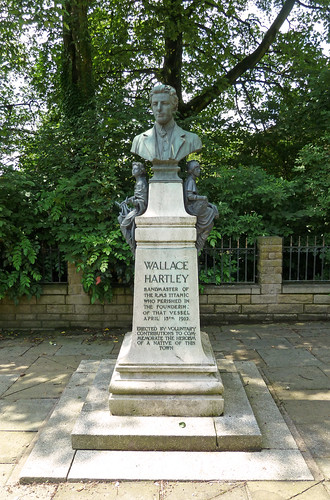