Phil Lynott was one of Ireland’s most famous musicians. He was a founding member of rock group Thin Lizzy. Lynott was also the group’s principal songwriter and vocalist. A life-size statue in his honour was erected in Harry Street, Dublin in 2005.

Philip Parris Lynott was born in West Bromwich in England on August 20th 1949. Lynott’s mother Philomena was from Dublin. She moved to England to work in Birmingham where she met Lynott’s father Cecil Parris who was from Georgetown, Guyana. Phil Lynott lived in England with his mother until 1953.

He moved to Crumlin in Dublin to live with his grandmother Sarah Lynott when he was four years old. Educated at Christian Brothers School in Crumlin Lynott became lead singer with The Black Eagles in 1965. He went on to become lead vocalist with several bands before forming Thin Lizzy in 1969.

Thin Lizzy became famous with such hit songs as ‘Whiskey in the Jar and ‘The Boys Are back in Town’. Lynott also enjoyed success as a solo performer. He is still a popular figure in the world of music. 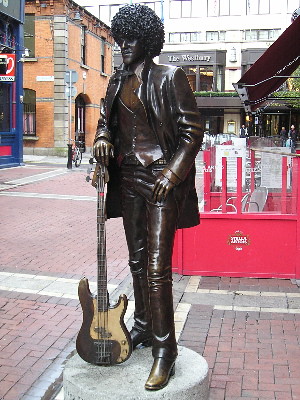