Henry Shefflin, who is a native of Kilkenny, Ireland is regarded by many as the number one player of all time of the game of hurling. Hurling is an ancient game with prehistoric origins which has been played for 3,000 years. It is one of the fastest field sports on earth. Hurling is one of the two national sporting games of Ireland and is played throughout the world. Henry Shefflin announced his retirement from inter-county hurling on March 25th 2015 at the age of 36. He made the announcement having won his third All-Ireland club Senior Hurling Championship with Ballyhale Shamrocks on the previous St Patricks Day.

Henry Shefflin was born in Ballyhale, Co Kilkenny in 1979. He was educated at his local primary school and at St Kieran’s College in Kilkenny City where he came to prominence as a hurler. He had his first All-Ireland success as a member of the St Kieran’s College team which won the All-Ireland Colleges’ Senior Hurling Championship in 1996. After he had completed secondary school he studied business and financial services at Waterford Institute of Technology. He was a member of the College team which won the Fitzgibbon cup in 1999 and 2000. Shefflin works as a bank official with The Bank of Ireland.

Having played at minor and under 21 level for Kilkenny, Shefflin made his debut with the senior team in 1999. He went on to make 71 championship appearances for his county. He won his first All-Ireland Senior Hurling Championship medal in 2000 and during his career won a record breaking total of 10 All-Ireland medals. He has also won a record breaking eleven All-Star awards. He is the top championship scorer of all-time. Shefflin is the only player to be named Hurler of the Year on three occasions.

Henry Shefflin, one of whose nicknames is ‘King Henry’ was born in the year 1979 On This Day. 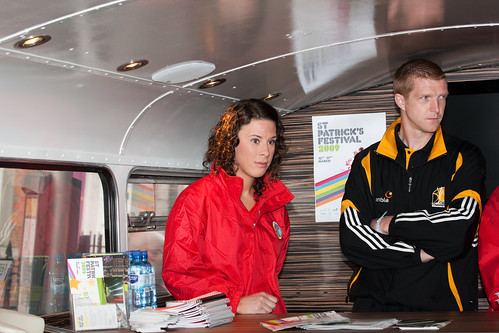 Grand Marshals, including Henry Shefflin, representing the four winning teams in the GAA Senior Cup Championships by infomatique on 2009-03-17 09:11:21