Robert Oppenheimer is often referred to as the ‘father of the atomic bomb’. He was a theoretical physicist who worked at institutions such as the University of California, Berkeley and Princeton University. Oppenheimer was also director of the Los Alamos Laboratory where the atomic bomb was developed.

Julius Robert Oppenheimer was born in New York City in 1904. Following graduation from Harvard University Oppenheimer moved to England in 1925 to Study at Cambridge University. A year later he moved to the University of Göttingen in Germany where he was awarded a PhD in 1927 at the age of 23. He was appointed Associate Professor at the University of California, Berkeley in 1929 where he taught until 1942.

The growth in popularity of the National Socialist Party (Nazi Party) in Germany and Hitler’s rise to power had a major influence on Oppenheimer. It led him to support resistance movements and he became associated with left wing politics. He supported the letter sent by Einstein and others to President Roosevelt at the beginning of World War II which indicated that the Nazi’s had the capability to develop a nuclear bomb. Roosevelt established the Manhattan Project in Los Alamos, New Mexico and Oppenheimer was appointed scientific director of the project in 1942.

On July 16th 1945 the first atomic bomb was successfully exploded in New Mexico. Within a month a further two atomic bombs were exploded, one in Nagasaki, Japan, and the other in Hiroshima, effectively ending World War II.

Oppenheimer refused to support the development of the hydrogen bomb in 1949 because of his regrets at the mass destruction caused by the atomic bomb. He was accused of having communist sympathies because of his previous association with left wing politics and he resigned from his post. He was appointed Director of the Institute of Advanced Study at Princeton University where he remained until 1966. He died in 1967 at the age of 62.

Robert Oppenheimer was born in New York City in the year 1904 On This Day. 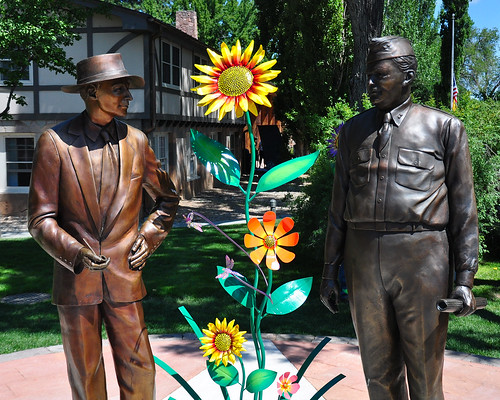