The Ha’penny Bridge is a pedestrian bridge which spans the river Liffey close to Dublin city centre. It is one of twenty four road, rail and passenger bridges on the Liffey in the greater Dublin area. For over 180 years it was the only pedestrian bridge to span the river until the opening of the Millenium Bridge just over 100m upriver in 1999.The Ha’penny Bridge has become one of the symbols of Dublin.

The Ha’penny Bridge, which is made of cast iron, was manufactured at Coalbrookdale in Shropshire, England, shipped to Dublin and assembled on site. The village of Coalbrookdale was well known in the 19th century for its decorative ironwork. Apart from the Ha’penny Bridge items as far apart as the gates of Hyde Park in London and the Peacock Fountain in Christchurch New Zealand were made in Coalbrookdale.

Installed in 1816 the Ha’penny Bridge replaced a ferry service operated by a Mr William Walsh, an Alderman of Dublin city. He was given compensation of £3,000 and was granted a lease allowing him to charge each person a halfpenny to cross the bridge for the next 100 years. When the lease ended in 1916 the bridge became the property of Dublin Corporation. The corporation stopped charging to cross the bridge in 1919.

Initially known as the Wellington Bridge it was officially named the Liffey Bridge in 1922 but is commonly referred to as The Ha’penny Bridge. In 1816 the bridge was used by just 450 people per day. Today that number has increased to an average of 30,000 per day. An assessment carried out in 1998 led to a major refurbishment of the bridge, which took over a year to complete and cost €1.25 million. Much of the repair was carried out by Harland and Wolff in Belfast. While the bridge was being repaired a temporary bridge was erected. Following refurbishment the Ha’penny Bridge was officially reopened on December 21st 2001.

The Ha’penny Bridge was opened for the first time in the year 1816 On This Day. 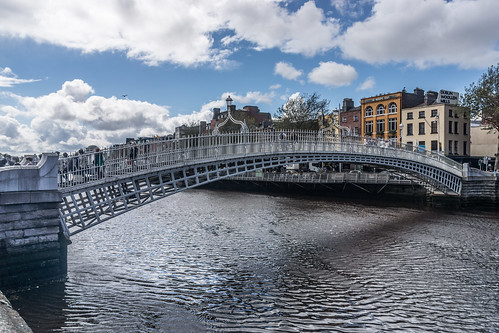