In Altamont Gardens in County Carlow, Ireland there is a giant Wellingtonia surrounded by Portugal Laurel. It was planted to commemorate the defeat of Napoleon by Wellington at the Battle of Waterloo in 1815. The Battle of Waterloo marked the final defeat of Napoleon Bonaparte, Emperor of the French. Two of the armies of the Seventh Coalition, the British and Prussian defeated the French Army. It is estimated that over 8,000 Irish soldiers, some of them in Napoleon’s army, fought at Waterloo.

There are several monuments to Wellington in Ireland and Great Britain. In Ireland a statue of Wellington stands on a monumental column in his home town of Trim, County Meath. It was erected in 1817. The Wellington Testimonial, commonly known as the Wellington Monument stands in the Phoenix Park in Dublin. It was completed in 1861.

Construction of the Wellington Monument began in 1817. The monument, which is an obelisk, is 62m tall. It is the tallest obelisk in Europe. There are four bronze plaques representing Wellington’s career at the base of the obelisk. The plaques are cast from cannons captured at Waterloo. One of the plaques depicts ‘Civil and Religious Liberty’. It was made by John Hogan who was responsible for the monument to Bishop James Doyle (JKL, James Kildare and Leighlin) in Carlow Cathedral.

The Wellington Monument in the Phoenix Park, Dublin was opened to the public in the year 1861 On This Day. 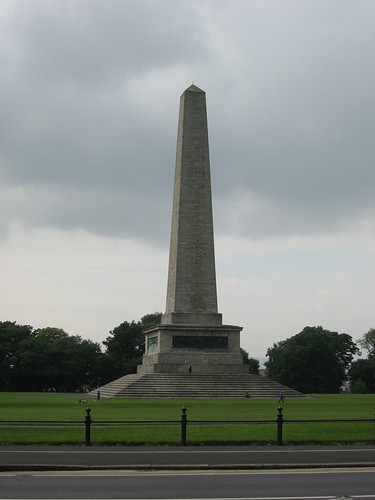