During the Battle of Berlin on April 30th 1945 Adolf Hitler, the NAZI (National Socialist German Workers’ Party) leader, committed suicide. His successor authorised Germany’s surrender a week later. The surrender brought to an end to World War II in Europe.

The German surrender was signed at the Headquarters of General Eisenhower in Reims in France on May 7th 1945. The following day was declared a public holiday. Celebrations were held to mark Victory in Europe Day in Great Britain, the United States Cities and in formerly occupied cities in Western Europe.

Victory in Europe Day was a public holiday held to mark the end of World War II in Europe in the year 1945 On This Day. 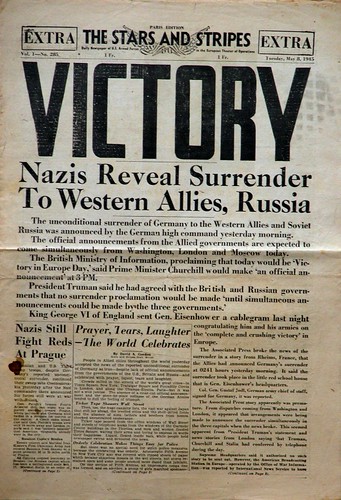