John Lennon was a renowned singer-songwriter, musician and composer. He was one of the founders of the world famous rock group the Beatles. The band became one of the most commercially successful in music history.

John Winston Lennon, who was of Irish ancestry, was born in Liverpool England on October 9th 1940. At age 15 he formed a band called the Quarrymen. Lennon met Paul McCartney at a church festival in Liverpool where they were both performing. Shortly thereafter McCartney joined Lennon’s band.

Lennon and McCartney became the band’s songwriters. Together they went on to become one of the most celebrated song-writing partnerships of the 20th century. The Quarrymen would eventually become the Beatles in August 1960 and would be joined by George Harrison, and Ringo Starr. The Beatles disbanded in 1970 and Lennon pursued a solo career.

John Lennon, renowned singer-songwriter, musician, composer and one of the founders of the Beatles, was murdered in New York, shortly after the release of the album Double Fantasy in the year 1980 On This Day. 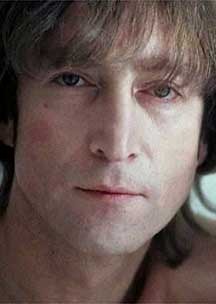