Charlton Heston was an actor and Hollywood star who was a native of the United States. The recipient of several awards he appeared in over 100 films during his career. He is best known for his roles in films such as ‘Ben Hur’ and ‘Planet of the Apes’.

Charlton Heston was born John Charles Carter in 1923. By the time he was aged six his name appeared on census record for Roscommon County, Michigan as Charlton John Carter. He appeared in his first film as Charlton Heston in 1941. He went on to appear in films such as The Ten Commandments (1956), Ben-Hur (1959), and Planet of the Apes (1968).

For his role in Ben Hur, Heston won the Academy Award for Best Actor. He was a supporter of Dr Martin Luther King and was present at the Civil Rights March on Washington in 1963. Charlton Heston died at the age of 84 on April 5th 2008. He was commemorated on a United States postage stamp which was issued on April 11th 2014.

Charlton Heston, award winning American actor who starred in films such as ‘Ben Hur’ and ‘Planet of the Apes’, was born in the year 1923 On This Day. 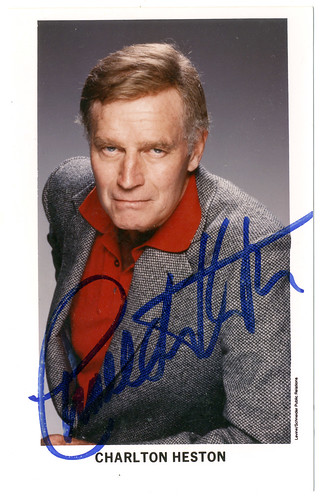