The Cathedral of the Assumption, Carlow is located on College Street in Carlow town, Ireland. Usually referred to as Carlow Cathedral, it is the cathedral church of the Roman Catholic Diocese of Kildare and Leighlin. The cathedral which is a cruciform building was built with funds raised in Carlow and throughout the diocese. It has been updated and refurbished several times during its long history. The last programme of refurbishment was completed in 1997.

Carlow Cathedral is built on the site of a church which had been constructed in 1787. The cathedral was largely designed by Thomas Cobden who designed many public buildings, private residences and churches in the Carlow/Wexford area and the midlands. At the time of construction Bishop James Doyle was the bishop of Kildare and Leighlin. Known as JKL (James Kildare and Leighlin) he laid the foundation stone of the new cathedral on March 18th 1828.

The cathedral took almost five years to complete. Colonel Henry Bruen of Oak Park supplied the white marble from his quarry in Graiguenaspidogue a few kilometres south of Carlow town. He also supplied the oak timber for the roof from the forests at Oak Park. The building stone came from a quarry on the Tullow road.

Bishop James Doyle died in 1834 at the age of 48 and was buried in the cathedral. A monument to Bishop Doyle was placed in the cathedral in 1840. The monument by the sculptor John Hogan was exhibited in Rome in 1839 and in Queen’s College Cork (UCC) in 1840. It shows Dr Doyle standing beside a kneeling allegorical figure of Ireland with her arm resting on a harp.

Carlow Cathedral, which is located in Carlow town, Ireland, was dedicated to the Assumption of the Blessed Virgin Mary in the year 1833 On This Day. 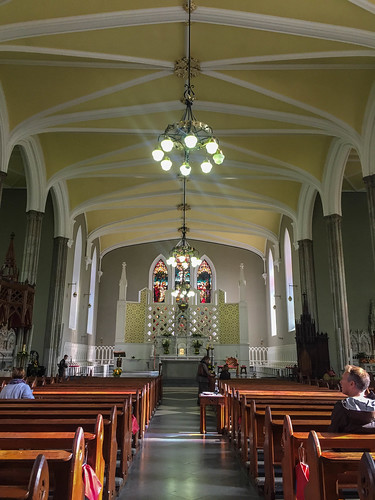