Jonathan Swift visited Carlow town during his time as Dean of St Patrick’s Cathedral in Dublin City. He stayed in Centaur Street and preached at St Mary’s Church. His observation of Carlow was “Poor Town, proud people, high Church and low steeple.”

Jonathan Swift was born at Hoey’s Court in Dublin city in 1667. He was Dean of St Patrick’s Cathedral in Dublin from 1713 until his death in 1745. Shortly before Swift was born his father died. Swift’s uncles supported him and his family and they paid for him to attend school. He was sent to Kilkenny College at age five. He was student there until the age of sixteen when he was admitted to Trinity College Dublin. He was awarded his BA degree in 1686 despite reports that he came to the attention of the college authorities for breaching the disciplinary code on many occasions.

Swift moved to England to work in 1689 but he returned to Ireland on several occasions for short periods. However it was only when he was appointed as Dean of Saint Patricks Cathedral in 1713 that he took up permanent residence in Dublin. He spent nearly all the rest of his life in Ireland. He devoted himself to exposing what he regarded as unjust impositions on, and the unfair treatment of, the Irish people by the policies being adopted by England.

A Proposal for the Universal Use of Irish Manufacture was regarded as being very patriotic and was enormously popular when it was first published in 1720. The The Drapier Letters, published in 1724, were an exposé of a plan to introduce a new copper coin that would have devalued Ireland’s currency. Swift asked: ‘Were not the people of Ireland born as free as those of England? Are they not subjects of the same king? Am I a freeman in England and do I become a slave in six hours by crossing the Channel?’ The publication established Swift as a national hero. He published Gulliver’s Travels in 1726 and a Modest Proposal in 1729.

Dean Jonathan Swift died at the age of 78 on October 19th 1745 and is buried in St Patrick’s Cathedral in Dublin. His epitaph which he wrote himself and instructed that it be carved in Kilkenny marble reads:

Here lies the body of Jonathan Swift, Doctor of Divinity and Dean of this Cathedral,

Where savage indignation can no longer lacerate his heart;

Go traveller and imitate if you can, this dedicated and earnest champion of liberty.

Jonathan Swift, Dean of St Patrick’s Cathedral, was born in Dublin in the year 1667 On This Day. 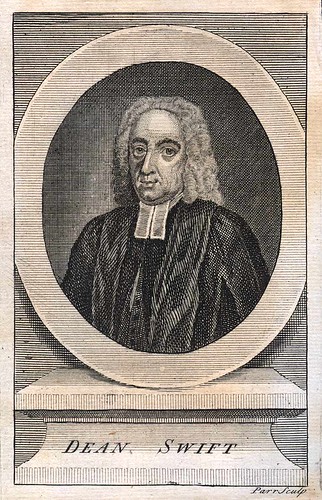 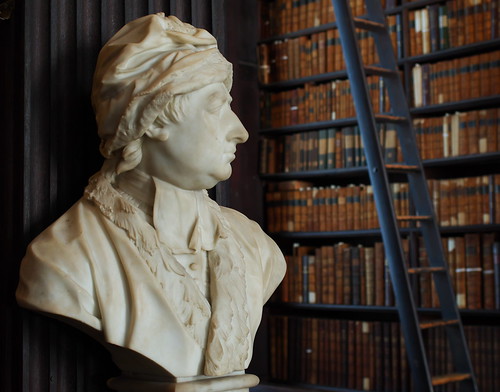