St Anne’s Church of Ireland on Athy Road Carlow, Ireland was dismantled and moved to Graiguecullen where it was dedicated as St Clares Catholic Church 1929. Henry Bruen of Oak Park, Carlow defeated Daniel O’Connell Jnr in the General Election of 1852 to become MP for Carlow. Bruen’s supporters held a collection to make the new MP a presentation to celebrate his success. Bruen suggested that the £2,000 which had been collected be put towards the building of a Church on a site he owned at Kelvin Grove on the Athy Road. The Gothic style Church which was cruciform was in shape and built in 1852 was called St Anne’s. The church was used by the local congregation during the following decades. However in the early 1900’s it was closed due to small numbers attending church services.

At that time St Fiacc’s Parish Church on the west side of the River Barrow in Graiguecullen (then Graigue Carlow) was overcrowded and in poor condition. The Parish Priest of St Fiacc’s was the Very Reverned M. H. Bolger who had served as an army chaplain during World War 1. He was friendly with Henry Bruen of Oak Park who had served in the Royal Artillery during World War 1 and was a descendant of the Bruen who had built St Anne’s Church. They were both golfing enthusiasts and Fr Bolger had played a part in Carlow Golf Club becoming tenants of Deerpark in 1922. Deerpark was then owned by the Bruen family. In 1925 it was announced that Mr Bruen had sold St Anne’s at a nominal price to Fr Bolger.

St Anne’s was dismantled and brought to its present location in Graiguecullen. The work was undertaken by Carlow Engineering firm Thompson and Sons. The new church was opened and dedicated on October 13th 1928.

The foundation stone for St Anne’s Church containing a scroll and coins of the realm was laid by Elizabeth Joyce Derick, wife of the architect John MacDuff Derrick, in the year 1852 On This Day. 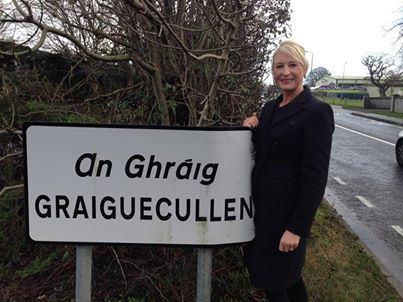