Rugby player Sean O’Brien was born in Tullow, County Carlow Ireland on February 14th 1987. He was educated at Tullow Community School and UCD (University College Dublin). Having played with Tullow Rugby Club and Irish Youths, O’Brien was awarded a Leinster Academy contract in 2005/06. He was a member of the Ireland Under-20 team which won the 2007 Grand Slam.

Sean O’Brien played his first game for his home province, Leinster in the 2008 Celtic league against Cardiff Blues. In December of the same year he made his debut in the Heineken Cup against French side Castres. For his speed, powerful runs, ability to carry the ball, counter rucking and defensive tackling he has come to be known as the ‘Tullow Tank’. He was a member of the Leinster team which beat Northampton Saints to win the Heineken Cup in 2011. He continues to play for Leinster and signed a two year contract with the Province in January 2014.

For the 2011 World Cup O’Brien travelled to New Zealand as part of the Irish Squad. He played in all of Ireland’s six World Cup games and started against Australia, Russia, Italy and Wales. In 2013 he was selected to tour Australia with the British and Irish Lions squad. The Lions won the test series and O’Brien played in both the second and third test matches. O’Brien was a member of the Ireland team which successfully retained the Six-Nation championship in 2015. He has been the recipient of many awards in his career to date including Guinness/Rugby Writers of Ireland player of the year 2011

Sean Kevin O’Brien will captain Ireland against Scotland at the Aviva Stadium in Dublin in 2015 On This Day. 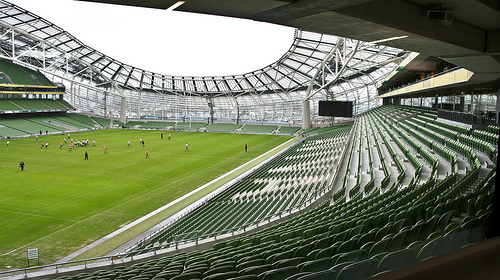