Carlow Masonic Hall is located on the Athy Road, Carlow, Ireland. The Carlow Masonic Lodge was constituted in 1789, sixty-four years after The Grand Lodge of Ireland was first formed in Dublin. Often referred to as the Freemasons it is the oldest fraternity in the world. It is non-denominational and non-political. However it still does not allow female members in Ireland

The organisation stems from the time when it was necessary to verify the qualifications of travelling stone masons as the moved from one site to the next. The organisation also helped with education and welfare of members. In recent years the main focus of members has been on fundraising. Known as the Carlow Royal Arch Chapter 116 the members meet in the Masonic Hall once a month.

There was reported to be great excitement when Carlow Masonic Lodge 116 opened its new premises in the year 1895 On This Day. 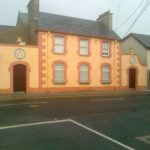