In Ireland the Kilkenny GAA (Gaelic Athletic Association) senior hurling team is the most successful in the country. The GAA was founded on November 1st 1884. The Kilkenny branch of the Association, which was founded in 1887, has its headquarters at Nowlan Park in Kilkenny city.

In the early years football was the dominant GAA sport in Co Kilkenny. The Kilkenny Senior Football team won the first ever Leinster Senior Football Championship when they beat Wexford 1-04 to 0-02 at Inchicore in Dublin. Over the following years other successes followed but hurling gradually became the dominant GAA sport in Kilkenny. Today, though football is still played in the county, Kilkenny is the only county that does not participate in the All-Ireland Senior Football Championship.

In the late 1800’s cricket was the most popular sport in Kilkenny with over forty cricket clubs in the county. However, as the GAA began to organise in Kilkenny, the ancient game of hurling started to experience a revival. In the space of a couple of decades hurling had become the dominant game in the county. In the early part of the 20th century Kilkenny teams were regularly winning All-Ireland hurling titles. They have continued down through the years to be the dominant force in the game in Ireland. By 2015 the Kilkenny Senior Hurling team had won:

The Kilkenny Senior Hurling team, often referred to as ‘The Cats’, won their first All-Ireland Senior Hurling Championship when they beat Cork by 1-09 to 1-08 in Carrick-on-Suir in the year 1904 On This Day. 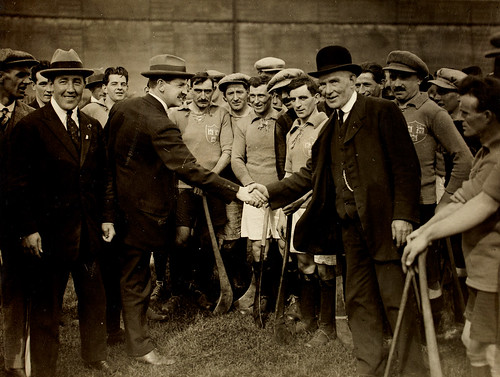