The Manchester United Football Team, nicknamed the ‘Busby Babes’, was returning from Belgrade on a British European Airways plane when the crash occurred. The team had drawn with Red Star Belgrade to qualify for the semi-finals of the European Cup. Enroute to Manchester the plane landed at Munich-Riem Airport for refuelling. Following refuelling the plane crashed on its third attempt to take off from a slush covered runway.

Of the 44 people on board the aircraft 20 died in the crash. Three more died later in Hospital. There were 21 survivors. Billy Whelan, who was also known as Liam was born William Augustine Whelan at St Attracta Road, Cabra, Dublin on April 1st 1935. He began his career with the Dublin club Home Farm before moving to Manchester United in 1953. He made 96 appearances and scored 52 goals during his career with the club.

When Whelan died he was just 22 years old. Following a campaign, initiated by St Finbarr’s GAA (Gaelic Athletic Association) club, a railway bridge in Cabra was named in his honour in 2006. The bridge is close to Dalymount Park and close to where Whelan was born. A plaque was unveiled by Sir Bobby Charlton, who paid tribute to his former team-mate. In 2008 on the 50th anniversary of the Munich Air Disaster, An Post issued a 55c stamp showing a photo of Liam Whelan.

Billy Whelan, Manchester United footballer from Dublin, died in the Munich Air Disaster in the year 1958 On This Day. 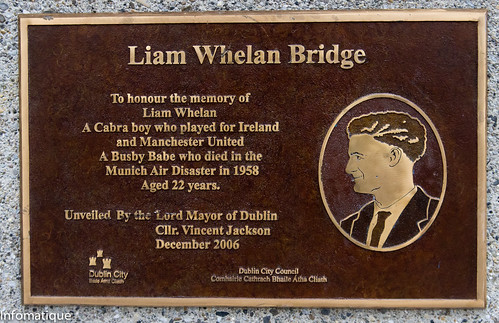