Three years after Ireland’s first railway was built between Dublin and Kingstown (Dún Laoghaire), Ulster Railway began construction of a railway line between Belfast and Lisburn in 1837. The line was extended southwards to Portadown in 1842. In October 1840 Sir John MacNeill from Mountpleasant near Dundalk Co Louth and John Dargan from Killeshin near Carlow town, began the construction of a railway line linking Dublin northwards to Drogheda. This line was officially opened on May 25th 1844.

The final section linking Drogheda to Portadown was not completed until 1855. Up until then passengers had to travel by road through the town of Drogheda from stations to the north and south of the Boyne. In order to complete the final section a bridge had to be constructed across the river Boyne.

The bridge, known as the Boyne Viaduct, was built at a height above the river which allowed for shipping on the river to be preserved. The Viaduct, which was designed by MacNeil, stands 30m above the river Boyne and is over 530m long. The building of the Viaduct completed the link between Dublin and Belfast. Nowadays the journey between the two cities on the Enterprise Service can be completed in just over two hours.

The first train officially crossed the Boyne Viaduct on its journey from Dublin to Belfast in the year 1855 On This Day. 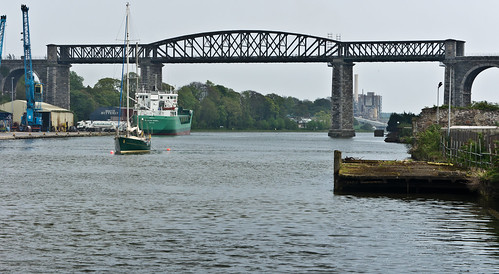 Boyne Viaduct on the Dublin-Belfast Railway at Drogheda