Poliomyelitis (Polio) is an infectious disease which is caused by the poliovirus. A very large number of people around the world were affected by polio during the 1900’s. The poliovirus is spread by faecal-oral contact or by infected saliva. A small number of those affected by the polio virus (less than 0.5%) are affected by muscle weakness and some of those may fully recover. Those who do not recover, suffer from paralysis (usually of the legs) and in severe cases some patients may die.

There is evidence to show that the effects of polio have been known since prehistory. However, it was not until the first half of the 20th century that polio reached pandemic levels in Europe, North America, Australia and New Zealand. Ireland experienced the first epidemic of the disease in 1942 and there continued to be other epidemics up to 1953. There was a severe outbreak of the disease in Cork in 1956. At the same time the United States was experiencing an annual average of over 35,000 cases.

There is no cure for Polio but the development of an effective vaccine means that the disease can be prevented. Work on a vaccine began in the early 1950’s. One of those conducting research on Polio was Dr Jonas Salk at the University of Pittsburgh in the USA. He discovered that there were three types of polio viruses and developed a vaccine against the disease. Testing of the vaccine began in 1952. It was administered to almost 2 million children before it was approved in 1955. The widespread administration of the vaccine led to a rapid decline in the incidence of polio. Salk was hailed as a miracle worker. In later years Dr Jonas Salk went on to carry out research on cancer, AIDs and HIV. He died in California on June 23rd 1995.

The announcement the Polio Vaccine, which Dr Jonas Salk had developed, was successful was made in the year 1955 On This Day. 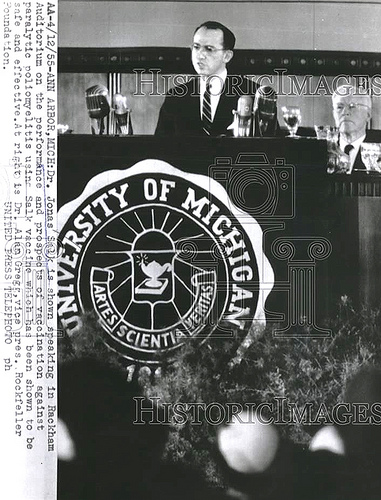