Mark Baggot served as Member of Parliament in the House of Commons in Dublin for the Borough of Carlow in 1689. He also served as Sherriff of Carlow during the Jacobite regime. Though not a graduate of Trinity College Dublin, Baggot was a member the Dublin Philosophical Society. He took a strong interest in the science of the time including the writings of Galileo.

The parliament of which Baggot was a member had been summoned to meet by King James II. James II was deposed in 1688. He was replaced by his daughter Mary and her husband William III, otherwise known as William of Orange. William III was a nephew of James II.

King James, having fled England, landed at Kinsale on March 12th 1689. He summoned Parliament to meet in Dublin on May 7th 1689. The Parliament, which became known as the Patriot Parliament, sat until July 20th 1689. The House of Commons was dominated by members who were of ‘Old English’ origin and Roman Catholic. The Church of Ireland Bishops retained their places in the House of Lords.

The parliament asserted its independence and recognised James II as king of Ireland. It guaranteed Liberty of Conscience and granted full freedom of worship. Lands forfeited under the reign of Cromwell were to be returned to the descendants of former owners. However over 2,000 supporters of William of Orange were declared traitors and were to lose their property.

Following his defeat at the Battle of the Boyne, James II fled to France. A number of the members of parliament who fought in the battle on the side of James II lost their lives. Mark Baggot returned to Carlow. Some MP’s and what was described as ‘gentlemen of Co Carlow’ objected to his return to Carlow, describing him as a ‘virulent papist’. They petitioned the Duke of Ormonde to have him removed from his estates. Though he lost some of his estates the petition largely failed.

A petition was made to the Duke of Ormonde to have Mark Baggot removed from his estates in Co Carlow in the year 1701 On This Day. 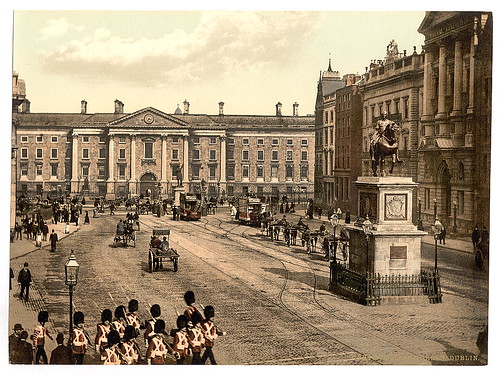