John Butler Yeats was an artist who was a native of Ireland. His categories of art include portraiture, sketching and oil painting. He was the father of the poet William Butler Yeats and the artist Jack Butler Yeats. Several portraits by Yeats can be seen in the Yeats museum in the National Gallery of Ireland. These include a portrait of his son William and of the Abbey actress Máire Nic Shiubhlaigh, whose father Mathew Walker ran a printing business in Carlow town.

John Butler Yeats was born in Lawrencetown near Banbridge, Co Down in 1839. He studied at Trinity College Dublin and graduated in 1862. Yeats then trained as a barrister at King’s Inn and was called to the Irish bar in 1866. The following year he decided to pursue a career as an artist. He moved to London where he trained at Heatherleys Art School.

Having established himself as a portrait painter Yeats moved back to Ireland. During the following years he moved several times between England and Ireland. In 1901 he was commissioned by Hugh Lane to paint portraits of prominent Irishmen including John O’Leary, George Moore and John Redmond. In 1908 he moved to New York City where he lived for the rest of his life. He died there on February 3rd 1922.

John Butler Yeats, artist, father of the poet William Butler Yeats and the artist Jack Butler Yeats was born in Co Down in the year 1839 On This Day. 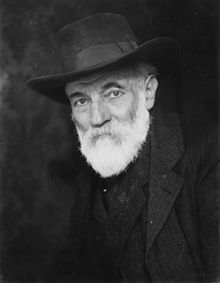