Mabel Cahill was a native of Kilkenny Ireland. She was a tennis player who became the first non-United States person to win US Open women’s singles in 1891. Though Cahill won several other major tournaments her international career was brief. In 1976 she became the only Irish person to be inducted into the prestigious International Tennis Hall of Fame.

Mabel Esmonde Cahill was born in Ballyragget, Co Kilkenny in 1863. One of 13 children she was educated locally and, it is thought, at the Sacred Heart Convent Secondary School in Roscrea Co Tipperary. She played in various tennis tournaments in Ireland before emigrating to the United States. By 1890 she had become a member of the New York Tennis Club.

Cahill defeated Ellen Roosevelt, a first cousin of President Franklin D. Roosevelt, to win the US Open in 1891. She successfully retained the title in 1892. Cahill also won the doubles and mixed titles at the US Open in both 1891 and 1892. She did not defend her title in 1893. Cahill later became a writer and actor. She died aged 43 in 1905.

Mabel Cahill, Kilkenny native who became the first non-United States person to win US Open women’s singles in 1891, was born in the year 1863 On This Day. 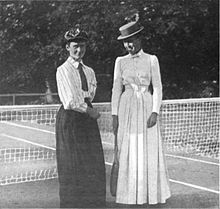