Emily Elizabeth Dickinson was born in Amherst, Massachusetts on December 10th 1830. She left school as a teenager and rebelled against the extreme religious zeal which was common at the time. She lived her whole life in Amherst eventually becoming a reclusive. She interacted with the world mostly through correspondence. She is widely regarded as one of the most innovative poets in modern literature.

Emily Dickinson, a poet who was a native of America, died in Amherst, Massachusetts in the year 1886 On This Day. 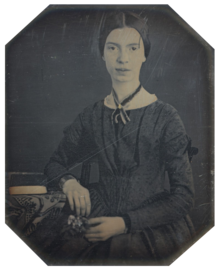