Rose Kennedy was the mother of President John F Kennedy. Often referred to as the matriarch of the Kennedy clan, she was a well-known philanthropist and socialite. Her husband Joseph P Kennedy was a successful businessman who served as United States Ambassador to Great Britain.

Rose Kennedy was born Rose Elizabeth Fitzgerald in Boston in 1890. Her father was Mayor of Boston. She married Joseph Kennedy in 1914 and the couple had nine children. In the 1940’s two of her children died and in the 1960’s John and Bobby were assassinated. Ted Kennedy served in the Senate of the United States for over 46 years. Rose Kennedy died in 1995 aged 104.

Rose Kennedy, mother of President John F Kennedy was born in Boston in the year 1890 On This Day. 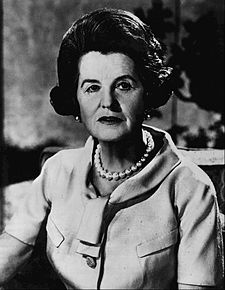