Fine Gael (Family of the Irish) is an Irish political party. Taoiseach Leo Varadkar, who is a TD (Teachta Dála) for the constituency of Dublin West, is leader of the Fine Gael. He was elected leader of the party in 2017.

In the Irish general Election of 2011 Fine Gael was returned as the largest party in the Oireachtas (Irish legislature). Following that election the party became the senior partner governing Ireland in a coalition with the Labour Party. In the General Election of 2016 the Government was defeated. However Fine Gael remained the largest party and now governs Ireland alone with Independents.

Fine Gael Fine Gael has a strong affinity with Michael Collins and he is widely regarded as the founder of the party. The Anglo-Irish treaty was ratified by Dáil Éireann by a vote of 64 to 57 on January 7th 1922. Following ratification the members of Dáil Éireann who had voted in favour of the treaty decided to establish a political party. The party which was called Cumann na nGaedheal (Society of the Gaels) was formally established on April 27th 1923. The name had its origins in a political organisation founded by Arthur Griffith in 1900.

Having lost the vote, those who voted against the Treaty walked out of Dáil Éireann and began a campaign of violent opposition. Those opposed to the treaty were led by Éamon de Valera. The group would later form the basis for the establishment of the political party known as Fianna Fáil.

Cumann na nGaedheal continued to form the government of the new Irish State until it was defeated in the election of 1932. During its time in office, despite major challenges both economically and politically, the institutions on which the modern Irish state is built were established. Following the election of 1932 Cumann na nGaedheal merged with two smaller groups National Centre Party and the National Guard to form Fine Gael.

Fine Gael today has a membership of around 30,000. Regarded as a party of the centre it has 70 representatives in the Irish Parliament (Oireachtas). The party has 233 representatives at local authority level and four members in the European Parliament where it is a member of the European Peoples’ Party. It describes its key principles as: ‘Equality of Opportunity, Enterprise and Reward, Security, Integrity and Hope’.

The Fine Gael Party was founded in the year 1933 On This Day. 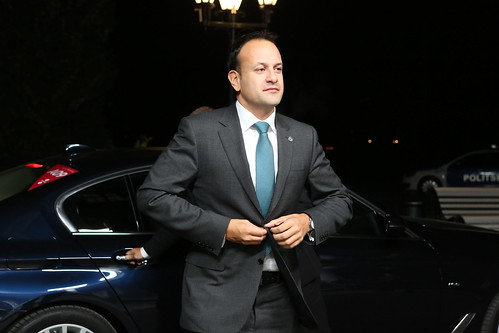